The History of Diwali: Why Do We Celebrate it Today?

The History of Diwali: Why Do We Celebrate it Today?

If one had to talk about Indian culture, it would be an incomplete discussion without a mention of the history of Diwali. Celebrated widely across India, Diwali is a story of many histories; varying from North to South and even Hinduism to Sikhism. It’s celebrated as triumph of light over darkness, good over evil and knowledge over ignorance. Celebrated across the country, Diwali is one of the most prominent Indian festivals.

Diwali, the festivals of lights, is celebrated around October-November every year. The tradition of lighting diyas on Diwali goes back to around 2,500 years.  However, since it finds mention in multiple religious texts with different versions, it is impossible to identify the exact timeline of the occurrence of first Diwali.

Much of the fanfare about Diwali is associated with Hinduism. The five-day long festival is marked by exhaustive shopping trips for lights, sweets and gifts for loved ones, spring cleaning and getting adorned in the finest clothes and jewelry.

The History of Diwali

Diwali is celebrated  at the end of the cropping season, and has always been associated with wealth and prosperity. It is believed that the festival finds its mention in ancient Sanskrit texts like Skanda Purana and Padma Purana. According to mythology, Deepavali is called Deepapratipadutsava in the 7th century Sanskrit play Nagananda, where newly-wed brides and grooms were given offerings and lamps were lit in the memory of Lord Vishnu and Goddess Lakshmi’s marriage. 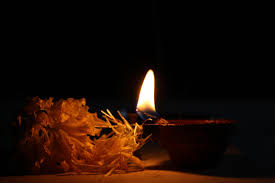 The festival, according to popular legend, is also related to the story of Yama and Nachiketa on Kartika Amavasya. The story that narrates the tale of true wealth and knowledge and right versus wrong is perhaps the reason why Diwali is celebrated as the festival of prosperity, knowledge and light. Deepavali was also referred to as Dipamalika in famous Sanskrit poet Rajasekhara’s ninth century work Kavyamimamsa, where rituals of homes being cleaned and decorated with lamps were mentioned.

The Story of Ramayana

Perhaps the most important and celebrated mention of Diwali is found in the story of Ramayana. The return of Rama along with his wife after defeating the Lankan King, Ravana, was celebrated by lit up lamps and diyas at the altars of all houses in Ayodhya. Since then, Diwali has been celebrated in all of North India by Hindus. Lord Rama, who was believed to be the reincarnation of Lord Vishnu, defeated Ravana, the King of Lanka, after he abducted Sita, the wife of Lord Rama. Alongside his brother, Lakshman, and an army, Lord Rama reached Lanka on foot. To reach Lanka, an army of monkeys created a bridge of rocks. Lord Rama along with the army killed the ten headed vile King, Ravana, to rescue his wife. He then returned to his homeland, Ayodhya, after an exile of fourteen years with wife Sita and brother Lakshman. Millions of diyas were lit to guide them home and their return was celebrated enthusiastically in Ayodhya. Therefore, it is a hindu ritual to lit diyas and decorate homes on the occasion of Diwali. It is done to ward off evil and welcome Goddess Laxmi.

Diwali is a celebration of five days, beginning with Dhanteras. On this day, people clean their homes and shop for gold, silver or other items. The second day is choti Diwali, whereas the main Puja is conducted on the third day. The fourth day is marked by Govardhan Puja or Gudi Padwa, which celebrates the relationship between husband and wife. In many communities, the fifth day is Bhai Dooj, which celebrates the bond shared by brothers and sisters.

In South India, another mythological story is linked to Diwali.  Lord Krishna, who was a reincarnation of Lord Vishnu, freed around 16,000 women from the evil King, Naraka, on the day of Chaturdashi.  Lord Krishna’s consort, Satyabhama, slayed the asura or demon Naraka.

When Naraka was taking his last breath, he realized his mistakes and asked people to celebrate his death as a victory of good over evil and light over darkness.  He then asked people to wear new clothes and burst crackers on this occasion. This event was celebrated as Deepawali in the southern states. It is celebrated a day before Diwali in North India.

In Tamil Nadu, people generally burn crackers, while in Karnataka and Andhra Pradesh, Naraka Chaturdasi is usually associated with oil baths, house cleaning, sweets preparation and celebrating with loved ones. In the south, Diwali is essentially celebrated on Naraka Chaturdasi, which is then followed by prayers to Goddess Laxmi on the next day.

The History of Diwali in Other Religions

Diwali also has a significant place in Jainism.  It is celebrated to give importance to the contribution of Tirthankar Mahavira to humankind. It commemorates celebration of Mahavira’s attainment of Nirvana in Pavapuri, Bihar. Lord Mahavira propagated scientific temper and logical thinking over superstition and blind faith.  He would speak of equity in economic, political and social spaces. He would also promote equality of the sexes and kinder behavior to animals. This is essentially celebrated as triumph of knowledge over ignorance.

In Jainism, Diwali is referred to Dipalika or the splendor of lamps in the Harivamsha Purana, written by Acharya Jinasena.  Jains observe fasting for three days during Dipalika. Jain temples are decorated with diyas, sweets, and lamps are distributed amongst friends and relatives. Devotees from across the world try to visit Pavapuri to pay their respect to Lord Mahavir. 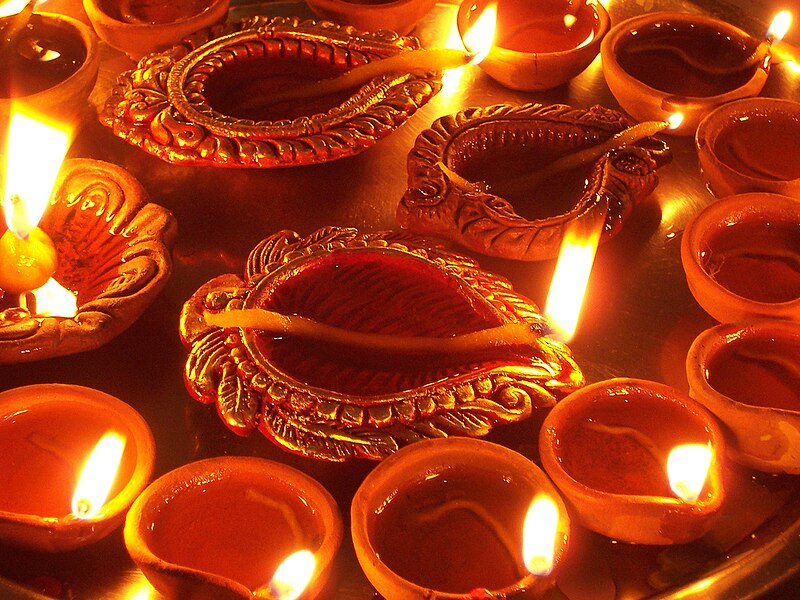 Diwali is an important festival for Sikhs too. In fact, Diwali coincides with Bandi Chor Diwas. In 1619, the Mughal Emperor, Jehangir, had captured the sixth Guru, Guru Hargobind, and 52 other princes. Diwali was celebrated after the release of all princes and the Guru. Sikhs celebrated the return of Guru Hargobind by lighting diyas in Gururdwaras and their homes.

Whether you’re a Christian or a Muslim, irrespective of religion, you might find yourself traditionally-dressed and lighting diyas on the occasion of Diwali.  It’s a festival that brings the Indian diasporas together, and reinstates the faith in good, knowledge, lightness and humanity. We wish you a very Happy Diwali this year too!

Added to your cart: